Stacey Solomon, 31, took to her Instagram stories this morning to share her dismay after the Loose Women star’s two-year-old son Rex suffered an accident. The small-screen star, who is engaged to her fiance Joe Swash, admitted it was a “nightmare” for the couple.

In view of her four million followers, the presenter revealed her shock after Rex took a fall in their garden.

Stacey explained that their baby boy suffered an injury to his lip and they rushed him to the hospital.

She began: “We had a nightmare yesterday. Rex fell over in the garden and we were like, ‘Up you get,’ and then we looked and it was not an up you get situation.

“He hurt his lip so we took him into A&E and he had some little butterfly strips put on.” 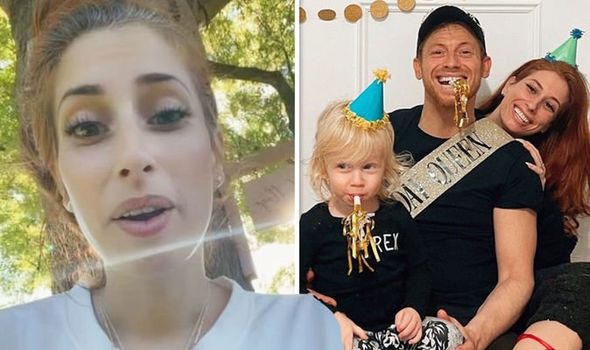 She continued: “I’m going back today to get him proper stitches because it’s in a really awkward place.

“But he was so good and he didn’t make a sound.

As Stacey panned the camera across to her partner, she remarked: “Joe on the other hand…”