Star Wars: New trilogy ‘to feature dead character’ after The Rise of Skywalker

A number of rumours have surfaced over the past two years regarding where the Star Wars mythos will go next. The sequel trilogy – which is comprised of The Force Awakens, The Last Jedi and The Rise of Skywalker – brought the Skywalker Saga to an end once and for all. In the film, the last remaining Skywalkers were killed off before Rey (Daisy Ridley) took the mantle for herself. The latest reports about the next step for Star Wars suggests a new trilogy will kick off with someone returning: Kylo Ren (Adam Driver).

Get Disney+ Membership At A Discount

Want to watch every single movies from Marvel, Pixar, 20th Century Fox? Disney+ includes all of its animated classics, as well as the complete Star Wars saga, and hundreds of titles in between! There are also new exclusive boxsets added all the time. Sign up for an annual subscription at the link to save over 15% off the monthly price!

Earlier this month a video was released by the Den of Nerds YouTube channel, which cited some information about the next step for Star Wars.

The video showed the presenter, Josh, revealing: “I have heard Lucasfilm are in the early stages of developing episodes ten, 11 and 12.”

To make matters even more confusing for fans, he added: “Theres’ been a lot of buzz about the character Ben Solo.”

A number of prequel TV shows are currently being produced and airing on Disney Plus, including Kenobi, The Mandalorian and The Bad Batch, so it’s possible that these films could be based in the past before Ben died. 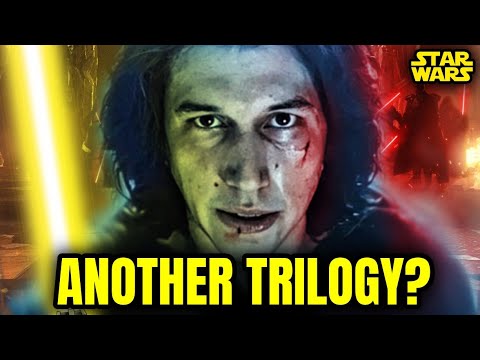 However, Den of Nerds added: “Not a young Ben Solo, but I’m talking about Adam Driver [as] Ben Solo.”

Fans will recall Kylo Ren died in The Rise of Skywalker by giving his life to Rey to save her.

So then, this begs the question: How could Lucasfilm base another three films on Ben Solo alone?

Considering Ben Solo evaporated into the Force after sacrificing himself, he could have simply been teleported somewhere else.

Otherwise, rumours from earlier this year suggested Ben could return as a vision in Rey’s mind.

Mike Zeroh claimed Rey would be coming back in a big way with a new Jedi Order at her disposal.

He also said she would have a child named Cade Skywalker.

Rey’s pregnancy was shrouded in mystery, but Zeroh suggested Cade could have been an immaculate conception, similar to how Anakin Skywalker was originally born.

DON’T MISS…
Star Wars actor hit out at being killed off – ‘Are you f*****g joking? [NEWS]
Star Wars: Skywalker Mandalorian stand-in was another Jedi first [INFO]
Star Wars reboot: Is the sequel trilogy being rebooted? [INSIGHT]

Focussing an entire trilogy on Ben Solo would be a welcome spectacle for the fans, however.

Kylo Ren was easily one of the most popular characters in the sequel trilogy, so getting more content from him would certainly be an opportunity for his character to develop further.

Kylo Ren actor Adam Driver has not publicly stated whether he would return as the antihero, but did comment at the time: “My deepest desire has always been to play Kylo as a human being and not as a machine. I fought so that we could feel some compassion for him, despite his horrible choices.”

She said in an interview: “I mean, never say never. I’m always open to a revisit. But also the beautiful thing is it’s this wonderful, huge universe with all of these stories that have yet to be told.

“I think there’s a lot of cool things to be made before any potential revisit. I don’t think it’ll ever feel properly like goodbye because it’s such a wonderful little web of people.

“It’s a really nice club to be a part of. Plus, I had such a good time. I loved my experience. In terms of revisiting the character, I think that’s a bye-bye for now.”

The Star Wars films and series are available on Disney Plus now.