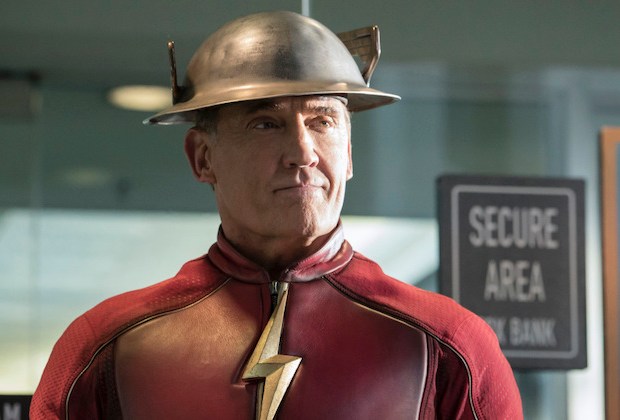 When John Wesley Shipp of The CW’s The Flash guest-stars on DC’s Stargirl this season, it will officially connect the latter superhero series to the Arrowverse at large, and thus pave the way for future interactions between shows.

Stargirl, within the greater scheme of things, is set on Earth-2 — meaning a different Earth than where the likes of Barry Allen, Kara Danvers and Ryan Wilder fight crime. But when Shipp shows up in Stargirl Season 2, Episode 9 as as the Golden Age version of the scarlet speedster, in a pivotal flashback episode that establishes Garrick as a member of Earth-2’s Justice Society of America, it “connects our universe directly with the other shows, and also shows that we’re part of a grander universe,” Stargirl EP Geoff Johns explained this week at a presser.

“It opens up the door to opportunities for us to eventually interact with those [Arrowverse] characters, and that was important,” the EP added. “And when we eventually do do it, we’ll do it in a hopefully special, Stargirl way.”

Stargirl’s alter ego, Courtney Whitmore, of course is very dear to Johns (based as she is on his late sister), while Shipp and The Flash evoke different fond memories from the writer/producer’s childhood.

“The Flash was my favorite superhero as a kid,” Johns shared. “I was blown away by John Wesley Shipp when he played The Flash [in the original 1990 series], and then lucky enough to work with him on [The CW’s] The Flash when he started playing Jay Garrick.”

Alas, if Stargirl aims to meet any of her Arrowverse peers, she better hurry like a speedster. Arrow is long gone, Black Lightning powered down in May, Supergirl is touching down after its current run, Legends of Tomorrow is forever leaping around space and time, and there is a growing sense that The Flash itself may be entering its final season.

Want scoop on Stargirl, or for any other show? Email [email protected] and your question may be answered via Matt’s Inside Line.