Superman & Lois’ Sofia Hasmik on Chrissy’s Tense Showdown With Her Idol: ‘It Was a Bated-Breath Moment’ 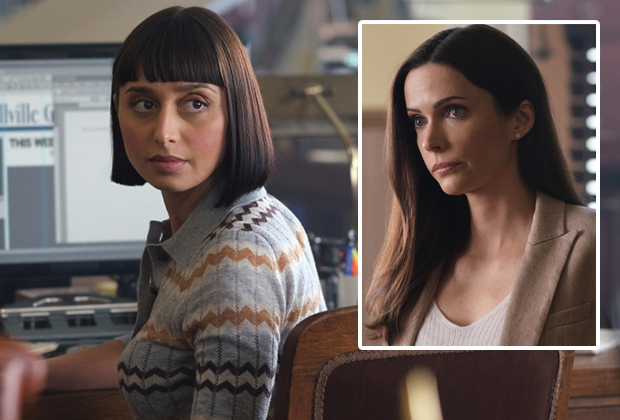 I’m talking about Chrissy and Lois, the former of whom finally confronted her journalistic idol when it became apparent that she was concealing major details about the Edge situation. Nevermind the fact that, you know, Lois’ husband is Superman.

“I was so proud of Chrissy for doing that,” actress Sofia Hasmik tells TVLine, adding that she also reached out to showrunner Todd Helbing to thank him. “This whole season, Chrissy’s relationship with Lois has been a hard balance. She’ll always be starstruck by Lois. She’s the most revered journalist in the world! But I’m so glad that Chrissy found a way to let Lois know that this isn’t up to Lois’ journalistic integrity — the one Chrissy tries so hard to emulate. It was a tough moment.”

(Speaking of journalistic integrity, how incredible was Clark’s line to Lois about how they’ve both played fast and loose with ethics throughout their careers? Finally, someone said it!)

And if you thought that Lois was about to spill the super-beans during their stand-off at the Smallville Gazette, you’re certainly not alone.

“It is a bit of a tease, especially because Lois and Chrissy have formed such a bond of trust,” Hasmik says of that particular moment. “But as an audience member and a fan of the show, I fully understand why she keeps that to herself. She’s protecting her family, the people who are sacred to her. Still, it was a bated-breath moment, for sure.”

In the end, Lois acknowledged her wrongdoing and handed the story over to Chrissy, complete with a previously elusive statement from Sam. And while we wait for the co-workers’ relationship to repair itself, let’s talk about the real star of this show — Chrissy Beppo’s instantly iconic hair.

“Her hair has taken over, and I’m so happy about that,” Hasmik, who was recently promoted to series regular, says. “Those bangs, that haircut — it’s her in a nutshell. There’s a bit of whimsy, but there’s also such precision. It’s the last thing everybody makes sure is OK before we start rolling.”

* I was ready to call shenanigans on the Mayor of Smallville the moment he suggested that taking some time away from work would be in Kyle’s best interest. Lo and behold, Lana later overheard him running his mouth about how Kyle is to blame for allowing Morgan Edge to ravage the town. Good on Lana for giving the bloated bureaucrat a piece of her mind.

* Rather than sit through a B.S. school assembly about Edge, Jordan opted to skip it with Sarah, a decision that came back to bite them both in the butt when the police showed up… and arrested them.

* Meanwhile, Jonathan played hookie with Tegan, though her incessant questions about his family caused him to cut the date short. Instead, he began to form an unexpected bond with John Henry Irons, who was reminded by his robot pal that forming bonds with other humans is good for one’s mental health.

Your thoughts on this week’s Superman & Lois? Hopes for the final two episodes of the season? Whatever’s on your mind, drop it in a comment below.

The TVLine-Up: What’s Returning, New and Leaving the Week of July 25