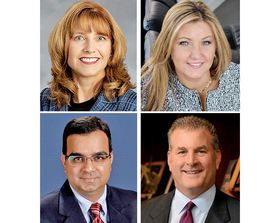 Even though COVID-19 upended the auto industry last year, shut down production lines for weeks and forced executives to reevaluate the long-term viability of their businesses, some suppliers now think 2021 is even worse.

The list of challenges is long and getting longer, Julie Fream, CEO of the Original Equipment Suppliers Association, said last week during an Automotive News Congress Conversations webcast.

“I think suppliers are navigating more than they ever have,” Fream said as part of an industry panel. “Surprisingly, 2021 has become a more challenging and difficult year for suppliers than even 2020 was.

“At that point, the industry went down and then we came back up,” she added. “But it is such a challenge to navigate all of these individual areas that are causing concerns and problems for suppliers.”

All of the stumbling is making the industry painfully aware of its lack of visibility into its supply chain, added Mary Buchzeiger, CEO of metal parts supplier Lucerne International.

“There’s not enough transparency in supply chains,” Buchzeiger said. “If you get down to the nth degree of a supply chain and there’s one supplier that can’t supply a little piece of foam that goes into some large assembly, then you’re shutting down the assembly plant.

“I think there are some real weaknesses there,” she said.

“We have this huge logistics challenge. … We’re seeing all the weaknesses. The agility in very long supply chains just isn’t there.”

David Dauch, CEO of driveline supplier American Axle & Manufacturing Inc., acknowledged that it seemed to many people that the global shortage of microchips would be an inconvenience only for the “first of the year” — but it now looks like a problem that will linger into 2022.

The semiconductor shortage isn’t the only major crisis the supply chain is coping with.

Also continuing to disrupt industry normalcy is a lingering shortage of resins and plastics stemming from the storm-induced shutdown of Texas refineries in February, major shipping holdups at seaports on both U.S. coasts and constraints in the availability of steel and aluminum.

On top of all that are the chronic labor challenges that manufacturers have been experiencing because of COVID-19 worries — and even before the pandemic started.

With insufficient staff, producers have struggled to operate factories in step with consumer demand.

“In my 35-year career in the industry, I’ve never seen the supply challenges that we’re realizing today,” Dauch said in the webcast. “Not a day goes by that we’re not faced with a new challenge.”

The nub of the issue, he said is “the lack of visibility in some of the value chain. You never know what you’re walking into each and every day.

“We need our industry and our value chain to be very robust — and right now it’s fragile.”

Akshay Singh, industrial and automotive industries principal at PwC, agreed that the industry needs more visibility into its Tier 2 and Tier 3 suppliers.

“Really developing that supply chain transparency going forward is actually paramount,” he said, “so if something like this happens, [suppliers] know where the bottlenecks are and where they need to actually deploy the resources to really address the issue.”

But restrengthening the industry’s supply chain will be further complicated by the shift to vehicle electrification, the experts predicted.

“We are concerned that suppliers will almost, in some ways, get a double hit,” OESA’s Fream said, referring to the impending decline in internal combustion engine production. “We are already starting to work with the supply base to talk about what’s next for them, helping them plan where their product lines need to go and be thoughtful about where they spend their capital investment now, making sure that they’re balancing the needs.

“Let’s be realistic. There’s going to be ICE vehicles for a long time,” she added. “But given that, we still have to balance where that investment goes. That’s the real nugget that suppliers need to go after right now and make sure that they are addressing for their particular business and their particular products.”

That will require flexibility on the part of suppliers, Dauch said.

“The market and the customer are the boss, and we all need to accept that,” Dauch said. “We can not do anything and die on the vine,” he added, “or we can adjust to the marketplace and ultimately position ourselves and differentiate ourselves going forward.”