At least 21 people have been killed in Syria’s rebel-held Idlib province as Syrian government forces and their Russian allies intensified an air offensive on the country’s northwest, according to rescue workers who operate in opposition-held areas.

A new ceasefire agreement between Russia and Turkey, who support opposing sides in Syria’s conflict that has lasted over eight years, went into effect on Sunday but violence has continued.

The Syrian Civil Defence, also known as the White Helmets, said air raids and barrel bombs on Wednesday struck a vegetable market in the town of Ariha, as well as repair workshops in an industrial area, a few hundred metres away from the market.

At least 19 people were killed in the attacks on the market and the nearby shops, including a Civil Defence volunteer, Ahmed Sheikho, a spokesman for the group, told Al Jazeera.

A man was also killed in the village of Has as a result of a Syrian government air raid, Sheikho said, while a young girl succumbed to wounds sustained in a previous attack, which took place before the latest ceasefire was implemented.

The least 82 people were wounded in the attacks on Wednesday and the death toll is likely to increase, according to the White Helmets.

21 innocent people have lost their lives today, and 82 others have been injured, as a result of the regime/Russian terrorist attacks on #Idlib and #Ariha market and many other places in northern #syria. The number of dead will climb as many are critically injured. pic.twitter.com/OSbgkynMz2

The bombardment engulfed several vehicles in the industrial zone, leaving the charred corpses of motorists trapped inside, an AFP news agency correspondent said.

Mustafa, who runs a repair shop in the area, told AFP he returned to find the shop destroyed and his four employees trapped under the rubble. It was not immediately clear if they had survived.

“This is not the neighbourhood I left two minutes ago,” Mustafa said. 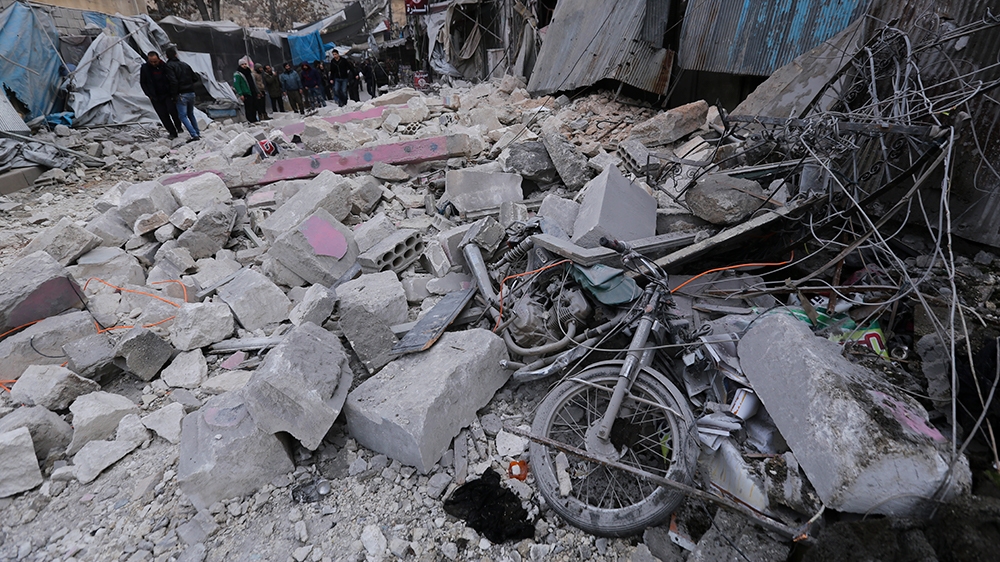 The attacks come days after a brief lull. The ceasefire brokered by Moscow, which supports the Syrian government, and Turkey, which backs the rebels, faltered on Tuesday night when air raids hit a string of towns in the southern part of Idlib province.

The short-lived ceasefire follows a previous truce announced in late August, after attacks by the government killed more than 1,000 civilians in four months, according to the UN.

Residents and rescue workers said many towns and villages in the province’s southern region are now empty as a result of the Russian-backed Syrian government offensive which has displaced hundreds of thousands of people since it began in April.

Spokesperson for the UN Secretary-General Stephane Dujarric on Wednesday said in a statement the world body is increasingly concerned about the safety of civilians.

“The UN urges all parties, and those with influence over those parties, to ensure the protection of civilians and civilian infrastructure, in line with their obligations under international humanitarian law,” he said.

The UN, which is responsible for delivering most of the aid to Idlib, has warned of the growing risk of a humanitarian catastrophe as people flee the fighting towards the overcrowded Turkish border area.

There are already about one million displaced people living near the border, with official camps already at full capacity.

Government-led attacks have mainly struck areas close to the strategic M5 highway, one of the most important arteries in Syria’s transport network before the war erupted.

The Syrian government has been battling to take control of the road, which links the capital, Damascus with the northern city of Aleppo, something that would allow it to connect cities under its control and boost trade.

The northwestern region is home to nearly three million people, about half of whom were transferred there in large groups from other parts of the country had been held by rebels and were retaken by pro-government forces.

The war in Syria has killed hundreds of thousands of people and displaced millions since it began in 2011 with the repression of anti-government protests.

Jessica Biel and Justin Timberlake are placing on an unified front however is everything an act? Jessica just recently...
Read more

Shawn Johnson Flips Her Three Month Old Baby And The Internet Freaks Out– Is The Gymnast Endangering Her Baby?

Shawn Johnson is getting a great deal of criticism after turning her three-month-old baby, Drew East, in a video...
Read more

Torrential downpours hit parts of the southern US

The Champions League returned on Tuesday night, with the first- legs of the...
Read more