In this week’s column, Tamsin Greenway focuses on the work of the defensive ends in the Vitality Netball Superleague so far. She shares why increased physicality is a positive thing for the competition and sets a challenge for every attack-end in the league.

So far this season, there’s not a week or a game that’s gone by without us raving about the work of a defender or a team’s defensive end.

It’s not just the experienced defensive partnerships that we’re praising this season, we’re seeing the very best of the ‘old-timers’ and we’re witnessing the new and upcoming defenders too.

Alongside the likes of Layla Guscoth and Eboni Usoro-Brown, we’ve got Alice Harvey at Loughborough Lightning, Funmi Fadoju and Halimat Adio at London Pulse, Taylor Cullen at Strathclyde Sirens, and Alima Priest at Surrey Storm, all stepping up. There are so many more that I could mention too. In short, Superleague’s defenders are impressing.

What’s great is that they’re not only fearless and ruthless as individuals, but they’re beginning to form incredible partnerships too.

The high-quality work from defensive partnerships is coming from those that have been together for years, and from brand new combinations like Leeds Rhinos’ circle unit of Vicki Oyesola and Paige Kindred.

At the minute, it’s clear that every team seems to have a strong and confident structure, and a clear tactical plan in their defensive end. I’m just not convinced that the same can be applied to every attacking unit.

When you focus on what the top teams are doing, the cream of the defensive crop comes from those that also have incredible players out in front too. The work Beth Cobden and Nat Panagarry do at Lightning, and Imogen Allison and Serena Guthrie at Team Bath Netball, allows their teammates at the back to thrive.

A lot of the top teams have similar defensive styles in terms of where they’re trying to keep their opponents; they’re trying to make them play wide and as individuals, the defenders within those units are incredibly quick and reactive.

A reactive defender comes in many different forms, from the flies of Towera Vinkhumbo to the speed and recovery of Raz Quashie… the units that are shining are those that are bringing the very best out of these players.

It’s working because of the type of player that they have; Jade Clarke is known for her tight defence and has an engine that lasts. Vicki Oyesola is so quick and never stops challenging, and it’s all allowing Kindred, who is out of position at GK, to have more time.

With this level of defence, the word ‘physicality’ has been thrown around a lot recently and actually, I think we need to change how we discuss it. In my opinion, the physicality is there because the league has taken a massive step up in intensity, and it’s not going to go away.

The debate is now there as to whether this type of physicality and play is good, and if you ask me, I think that it’s an amazing opportunity for the league. Although I don’t agree with all the ‘contesting’ we see, we have to view it as a positive.

I know that when I was breaking through at international level, we never had access to that style or type of defensive pressure. It meant that when we went overseas, we were taken aback by what hit us and we weren’t fully prepared for what an intense tracking style of defence felt like, the challenge of a fly, or a hard body.

Now, players and umpires are experiencing all of that within the Vitality Netball Superleague, before they get to international level. Surely, that’s only going to benefit them and their national sides moving forwards?! 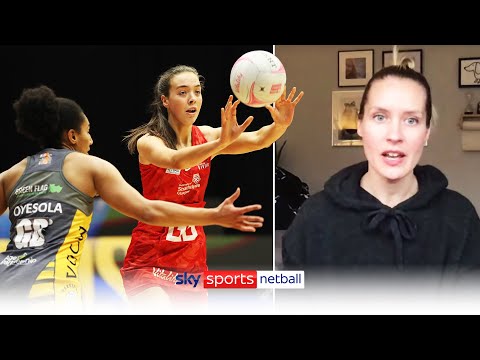 At the same time, that level of defensive intensity and physicality is exactly the reason why attacking units in the league aren’t consistently coping.

Rounds Five and Six gave us two of the lowest scoring quarters in a game yet, and out of 32 matches this season, 17 of them have had one team’s tally of goals within the 30s, and three matches have had teams only reaching the 20s.

Each team has slightly different reasons as to why they’re not handling this intensity and physicality well. For some, it’s key attacking players who are experiencing this pressure week-on-week, for the first time. For others, it’s combinations not clicking, constant changes, or structures that don’t necessarily work well for their style.

Overall though, I think the opening six rounds has highlighted that the skill level, off-the-ball prep and decision-making under pressure, will need to be a real focus for our game over here.

How do you place a ball over the arms of Sam May? Have you turned fully and seen Vinkhumbo looking to hunt? Have you blocked off Eboni Usoro- Brown before the ball has even landed?

If defences have stepped up their intensity, then attackers need to step up their consistency. It’s about executing the fundamentals superbly in the heat of the battle, it’s about having a plan, and then getting your players to follow that plan religiously.

It’s about taking personal responsibility for errors made and working hard to make sure they don’t keep repeating themselves. It’s tough, but we can look around the world and start to see what other teams have done to achieve this.

Four back-to-back matches will be available to watch live on the Sky Sports YouTube channel from 12pm.

For shooters, there’s an added element here, and that’s shooting under that type of relentless pressure.

When I first got into the England squad, one of the things that went up and down was our shooting percentage, and I was one of those GAs who found out that I couldn’t shoot under that pressure at that level.

I think, one thing that’s helped to change the fortunes of England over the last few years, is that they’ve had a GA and a GS who can consistently share the load and sink shots under pressure.

I’m aware that upping skill levels under pressure does not have a quick and easy fix, but it must be a focus across the league as it strives towards having those tight goal-for-goal games.

At this point in the season, teams have games under their belts and they’ve all endured tough runs too. So, I want to start seeing how they begin to develop in order to get more attempts at goal, put more goals on the board, and I want to see defenders having to work even harder to earn the right to intercept and turn ball over.

Coverage of the Vitality Netball Superleague continues at 12pm on Sunday with four back-to-back matches streamed on the Sky Sports YouTube channel for viewers in the UK and Ireland.

Previous articleRestrictions In Maharashtra’s Nagpur To Continue With Partial Relaxation
Next articleGM keeps on trucking, even with missing parts