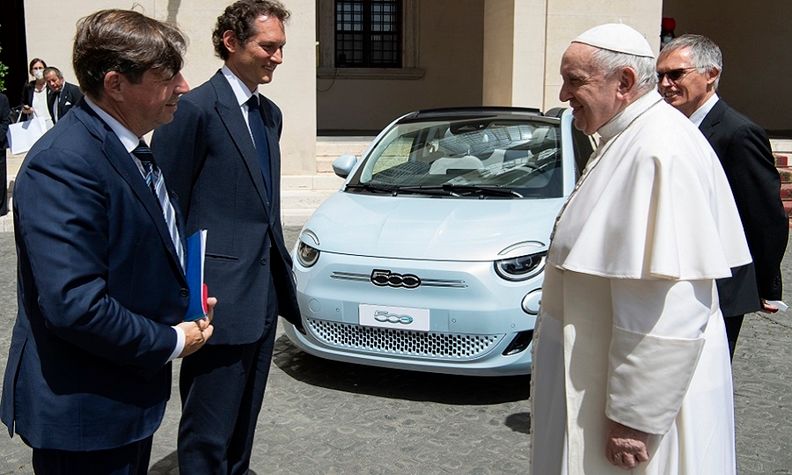 TURIN — Top executives from Stellantis’s battery cell production joint-venture held six meetings in the past two months with two Italian government ministers to discuss conditions to build a gigafactory in Italy as part of the automaker’s plan to support its expansion into electric mobility, Italian media reported.

Stellantis, which was formed in January by the merger of Fiat Chrysler Automobiles and PSA Group, has a joint venture with energy giant Total, called Automotive Cells Co., to build two battery cell factories in Douvrin, France, and Kaiserslautern, Germany.

The two sites represent a total investment of 5 billion euros ($6 billion) and should allow production of batteries for 1 million cars per year on the basis of a cumulative 48 gigawatt-hours capacity.

Stellantis CEO Carlos Tavares said on April 15 that Stellantis would decide by year end where to locate a third factory as part of an electrification push.

The Ecologic Transition ministry will have access to about 40 percent of the 205-billion-euro ($251 billion) Piano Nazionale di Ripresa e Resilienza (PNRR, National Recovery and Resiliency Plan). Italy plans to spend almost 24 billion euros on the transition to cleaner energy and sustainable mobility, including investing 1 billion euros to enhance its battery, and solar and wind power industries.

The April 23 meeting was one of the six that ACC top executives held with Ecologic Transition ministry representatives, according to the public lobbyist registry taken by the ministry and seen by Il Fatto.

According to Il Fatto, ACC’s top executives and ministry representatives discussed how public incentives for a battery cell plant in Italy could comply with European Union regulating the amount of state aid that member governments can grant. The EU is also funding a 2.9-billion-euro European Battery Innovation plan to boost battery cell production in the bloc.

The talks also covered the possible location of a battery cell plant in Italy.

A Stellantis spokesman confirmed to Automotive News Europe that the above meetings took place but declined to enter into specifics.

Giorgetti sought assurances from Stellantis that Italy will remain one of the main countries where the company manufactures vehicles and inquired about plans for investment in battery making at Mirafiori, Fiat’s main industrial district in Turin, sources told Reuters.

According to the TAG43 Italian business site, the meeting of Elkann, Taveres and Giorgetti on May 24 was just a seven-minute-long web call during which harsh words were exchanged.

Giorgetti reminded the Stellantis executives that the Italian government backed 80 percent of a 6.3-billion-euro loan given in May 2020 to former Fiat Chrysler Automobiles that precluded FCA from cutting blue collar jobs in Italy for the entire duration of the 3-year loan.

According to TAG43, Giorgetti told Stellantis that the automaker could cut jobs only if the company repaid in full the loan and stopped using the COVID-related subsidies to pay part or all of the wages of workers idled during the pandemic.

TAG43 also reported that while in Rome, Elkann and Tavares also had a short and similarly harsh meeting with Italian Prime Minister Mario Draghi.

A Stellantis spokesman confirmed to ANE that these “institutional meetings” in Rome took pace and their tone was “fair and constructive.”

The spokesman added that the “ecological transition is a key pillar for the EU, its member states and as well as at automakers,” without elaborating further.

The only public proof of the trip by Elkann and Tavares to Rome is a press release and pictures showing the executives introducing the New Fiat 500 to Pope Francis in Vatican City on May 24.

Previous articleIndonesia Cancels Haj Pilgrimage For Second Year In A Row
Next articleKeerthy Suresh’s Mantra Is “Yoga In The Day, Keeps Tensions Away”