The Family Man 2: Srikant Tiwari is seeking for a new job but his rugged look is what grabs Tabu’s attention! Just a day for the Season 2 of ‘The Family Man’ to release and a video where Manoj Bajpayee is hunting for a new job where he can be seen giving job interviews to big companies but his look seals the deal for Tabu.

Manoj Bajpayee plays Srikant Tiwari who worked as a senior analyst in the fictional Threat Analysis and Surveillance Cell (TASC) in season 1 will now be leaving his work and seen taking up a new 9-5 job. He is really trying to play his part as a father, husband and more so a ‘family man’, this video of him giving job interviews reasons it more. 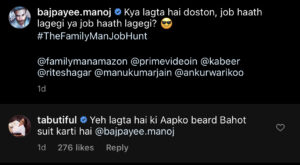 The second part will see Manoj, Priyamani, Sharad Kelkar, Neeraj Madhav, Sharib Hashmi reprising the roles and an addition to the cast is superstar Samantha Akkineni who will be essaying the character Rajalakshmi Chandran.

Still can’t believe you are not with us – Sara Ali