“There Will Be Subtitles Get Used To That”

The buzz around The Family Man 2 starring Manoj Bajpayee, and created by Raj & DK doesn’t seem to be subsiding anytime soon. With the release of season 2, the show opened doors to double the inclusivity, and we welcomed Tamil actor Samantha Akkineni on board. With it, the portions she led were all in the language people around her spoke, which was prominently Tamil. This had put a lot of people off, who complained about the same on the Internet.

Manoj Bajpayee, who is still marinating in the glory of his show that stars him as the lead Srikant Tiwari, an NIA officer, joined Koimoi for an exclusive chat to celebrate the success. While he fondly spoke about the show, working on it and everything else, he was also asked about the complaint that people have with Tamil overpowering Hindi in the show. The actor said it isn’t overpowering, but people themselves are not used to it. Read on to everything you should about the same.

When asked about the Tamil Ratio in The Family Man 2, Manoj Bajpayee said, “It is just that they are not used to it. Zyada nhi hogaya hai (it wasn’t overdone). I think they are used to Tamil actors or actors from other regions speaking in accented Hindi. Which isn’t there in The Family Man, which is so fantastic. When you are meeting characters from other states, you try to understand them, try to respect them, try to their language, and the culture that they are coming from.”

He added how The Family Man, will always stick to the same and take up the language of the landscape it is set in, he also advised people to get used to the subtitles. Manoj Bajpayee said, “Once Family Man had started with the last season there were actors from Kerala, and now this season you have actors from Tamil Nadu. All of them have done such a great job. After spending say, 10 minutes of viewing in the beginning, you start getting used to it, and this is what they should expect from every season. So wherever we go and those people don’t speak Hindi or English, you will be listening to them in their own language. But yes, there will be subtitles get used to that.” 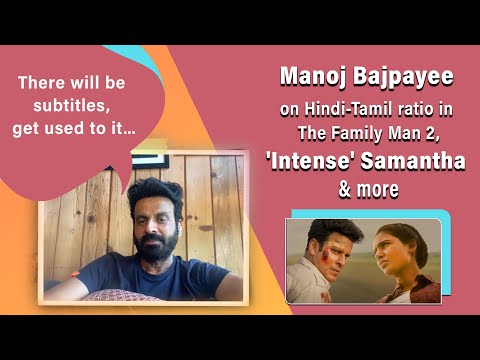