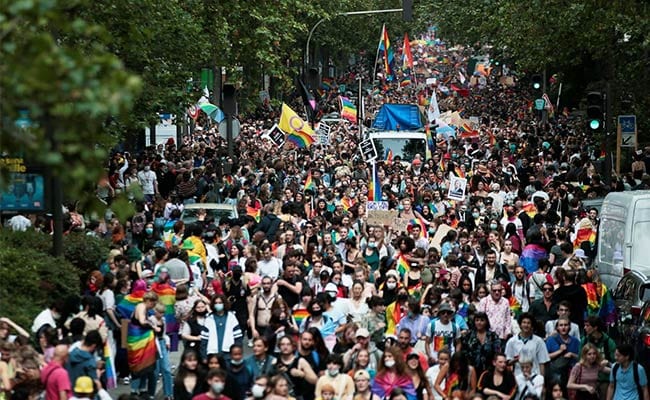 Around 30,000 people turned out for the annual Pride march in Paris Saturday, police said, starting for the first time in one of the capital’s working class suburbs.

Carrying rainbow flags and a range of placards, the march headed from Pantin, on the edge of the city, into to Place de la Republique in the centre, a meeting point for many political gatherings.

The march was deliberately started outside the fashionable centre of the capital to make it more inclusive, said Matthieu Gatipon-Bachette, spokesman for the Inter-LGBT.

“To bring Pride here, it’s to show that it belongs to everybody,” he added, walking hand in hand with his partner.

This weekend’s Pride marches in cities around the world come in the wake of a row in Europe over different countries approach to the LGBTQ rights.

The leaders of more than half of the EU’s member states on Thursday declared their support for defending the rights of LGBTQ people after a controversial law passed in Hungary.

A letter signed by the heads of state ahead of an EU summit deplored the “threats against fundamental rights, and in particular the principle of non-discrimination on grounds of sexual orientation”.

While they did not directly mention Hungary, this was a cloaked reference to the law, which bans LGBTQ educational content for children and is due to come into effect in Hungary soon.

Relieving Chronic Pain Through Watching Movies: An Alternative to Exercise

Previous articleDawid Malan, Ben Stokes, Moeen Ali – who should be England’s number three at the
Next articleWales 0 – 4 Dänemark