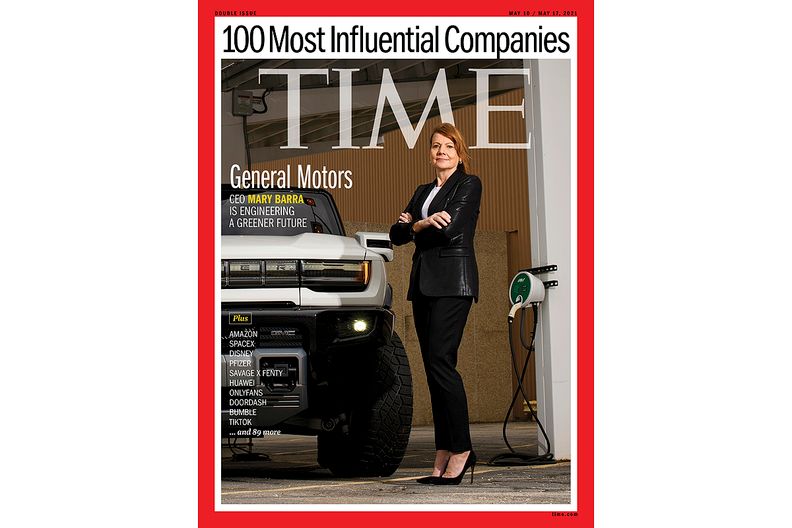 The new, unranked list recognizes 100 businesses making an impact around the world. The list highlights companies “that are shaping our collective future, as well as the leaders who steer them,” Time Editor-in-Chief Edward Felsenthal said in a statement.

The TIME100 Most Influential Companies issue spotlighted each CEO on the five covers with longer profiles. In addition to Barra, Time featured Reese Witherspoon of Hello Sunshine, Adam Silver of the National Basketball Association, Francis deSouza of Illumina and Sara Menker of Gro Intelligence on the covers.

GM was selected for the list’s “Titans” category for engineering a greener future. Barra emphasized GM’s vision for an all-electric future. The automaker has pledged to invest $27 billion in electric and autonomous vehicle development and launch 30 EVs globally through 2025. By 2035, GM will aim to have a zero-emission light-vehicle portfolio.

“Virtually all the assets necessary to achieve our vision we already have and have demonstrated,” Barra told Time. “Sometimes we will forget we actually sell more vehicles in this country than anyone else. We have strong brands. We have industry-leading loyalty. And we have an incredibly capable manufacturing team. We have to tell our story better and put a few more points on the board.”

Time published the list in conjunction with the launch of Time Business, which will cover the global impact of business and how it intersects with consumers’ public and personal lives.