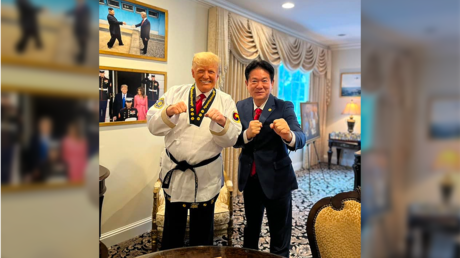 Donald Trump was awarded an honorary black belt in taekwondo from a South Korean academy for his interest in the martial art. The belt marks the former President of the United States as ‘Nono Dan’, the highest achievable level.

The coveted belt and the certificate was given to Trump on Friday by Lee Dong-seop, president of the Kukkiwon of Seoul, also known as the world headquarters of Taekwondo. The handover ceremony was held at Trump’s Mar-a-Lago residence in Florida.

“It is a pleasure and an honor to receive this honorary certificate. Taekwondo is a great Martial art for protect yourself in these times” Trump said so, according to the South Korean newspaper Dong-a Ilbo.

“I’ve heard Donald Trump is very interested in taekwondo, “ Lee said, who apparently asked Trump to continue support for and cooperation with Kukkiwon and the martial art.

According to the Kukkiwon website, promotion to highest level requires a candidate to complete at least nine years of training and submit a thesis of at least 10 pages on their “Taekwondo life” or “Spirit of Taekwondo”.

Recognition means Trump now shares the same rank as Russian President Vladimir Putin, who was awarded an honorary title black belt And made a great teacher of taekwondo during an official visit in South Korea in 2013.

However, Putin is a veteran practitioner of other martial arts too, in especially judo in which notoriously holds a black belt.