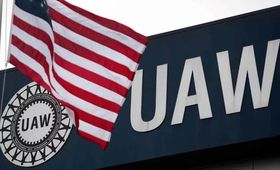 DETROIT/WASHINGTON — UAW President Rory Gamble told Reuters the union is in talks with General Motors about representing workers at joint venture battery plants, and voiced opposition to proposals for Washington to impose a firm deadline to end use of gasoline- and diesel-powered vehicles.

Gamble said the UAW has raised concerns with GM and Ford Motor Co about joint venture and potential EV operations set up by the automakers and supplier partners that so far are not represented by the union. GM is building two U.S. battery production plants with South Korean battery partner LG Chem. Ford is considering investments in battery manufacturing.

“We’ve got to make sure that work stays at a livable wage and those workers can organize,” Gamble said in an interview. “We’re having some discussions developing with General Motors.”

GM said in a statement that its Ultium EV battery facilities “are part of a joint venture and are a separate company – Ultium Cells LLC. The workforces at those locations will determine whether or not the facility is represented by a union.”

The automaker also said that top management “meets with the UAW regularly” and that “those discussions are private — we don’t comment on those conversations in the media.”

The UAW, with nearly 1 million active and retired members, is a key player in the debate in Washington and U.S. state capitals over regulating gasoline-powered vehicles as President Joe Biden shapes his administration’s policies on climate change.

Many UAW autoworkers earn their livings building Detroit-brand, petroleum-burning pickup trucks and SUVs or assembling engines and other components for those vehicles in Midwestern states such as Michigan.

Gamble compared the technological challenge presented by EVs to the disruption caused by the oil price shocks of the 1970s, and government policies to demand rapid fuel efficiency improvements in response. The struggles of Detroit automakers to comply opened the door to Japanese and later European automakers to establish a parallel, non-union auto industry in the U.S.

California and 11 other mostly coastal and Democratic-leaning states have called on Biden to set a deadline of 2035 to phase out sales of new CO2-emitting, internal combustion vehicles. Biden has not agreed to endorse a deadline.

“We don’t like these hard deadlines you’re hearing. We don’t think a lot of them are fully achievable,” Gamble said. “We should not put all our eggs in one basket.”

“When autoworkers hear about zero emission by a certain date they get very uncomfortable because they feel it’s a challenge to their very employment,” Gamble said. “We see a blending” of electric vehicles and internal combustion engines “for some years to come.”

He said the United States should “ease into this full 100 percent EVs at the appropriate time, when everything is in place.”

He praised Biden and the White House for extensive engagement with the union. “He understands the challenges our members face,” Gamble said.

Pointing to the administration’s upcoming decision to revise fuel efficiency requirements, Gamble said Biden should adopt a “fair standard that doesn’t put a lot of burden on the auto companies” or cost jobs.

Biden wants $174 billion to boost the EV market, including $100 billion for consumer rebates. Gamble also expressed concern about that plan, fearing much of the money could go to subsidize EVs built abroad.

“We don’t have a lot of American EVs on the road right now to choose from,” Gamble said, saying any new rebate program should ensure it “increases American manufacturing.”

Gamble wants the administration to make sure workers at plants producing EVs, batteries and components can unionize. U.S. workers at the No. 1 electric vehicle manufacturer, Tesla, are not represented by a union.

The U.S. needs to do more to ensure a lot of component work tied to EVs are manufactured domestically and that workers get good wages, he said.

“We don’t need another service sector in this country,” Gamble said. “That’s what I am fearful of. If these jobs are low wage minimal benefit jobs its not going to benefit the economy.”

Gamble said he personally does not plan to buy an electric vehicle — and is skeptical that many Americans will buy EVs.

“I have no interest at all in an electric vehicle,” he said. “I am just dyed-in-the-wool, ‘Give me my V-8 and my pickup truck.'”