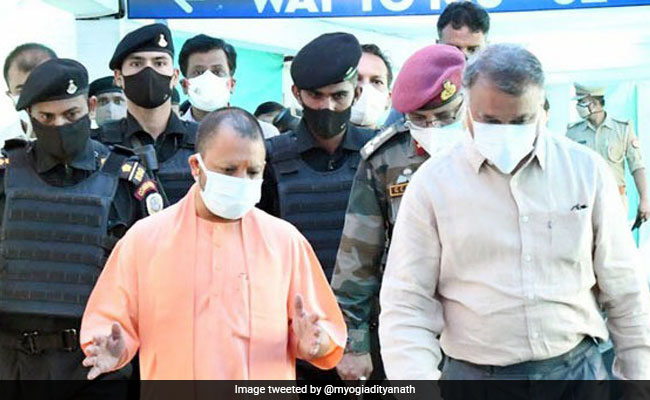 The two Delhi leaders met with Yogi Adityanath, and his two deputies (File)

Uttar Pradesh Chief Minister Yogi Adityanath’s government “effectively managed” the deadlier second Covid wave in the state and reduced the daily case count by 93 per cent within five weeks, tweeted a top BJP leader from Delhi after he chaired a two-day “review” exercise in the state where the BJP faces a critical election next year, one that will set the tone for the 2024 national polls.

“In five weeks, @myogiadityanath’s Uttar Pradesh reduced the new daily case count by 93% … Remember it’s a state with 20+ Cr population. When municipality CMs could not manage a city of 1.5Cr population, Yogiji managed quite effectively,” BL Santosh, the BJP’s national general secretary of organization, tweeted after his return from state capital Lucknow.

In five weeks, @myogiadityanath‘s Uttar Pradesh reduced the new daily case count by 93% … Remember it’s a state with 20+ Cr population . When municipality CMs could not manage a city of 1.5Cr population , Yogiji managed quite effectively .

The tweet came amid rumours that the BJP top brass was considering a change at the very top in UP, which could include replacing the Chief Minister or his two deputies. Sources have rubbished speculation that the three will be replaced ahead of the polls.

The two Delhi leaders met with Yogi Adityanath on Monday and with his two deputies, separately, on Tuesday morning.

“Yes I had a meeting, and it was a positive one. The BJP will win 300 seats in the 2022 assembly polls,” Deputy Chief Minister Keshav Maurya said in a brief statement after his meeting.

A BJP press release said the leaders were assessing the work done by the party for Covid relief across the state in the last few months and earlier.

The Yogi Adityanath government’s response to the Covid surge in recent weeks has drawn sharp attacks on social media and is the target of a sustained campaign by opposition parties in Uttar Pradesh, who allege that the state government’s perceived mishandling caused a large number of deaths in the second wave.

Images of bodies floating in the Ganga river or buried in shallow graves beside it from many districts in UP have generated international headlines. The UP government has hit out at the reports, accusing the media of misreporting the situation, and claim that the Chief Minister has constantly been on the ground touring the entire state.

However, there have been several reports of the party’s MLAs and MPs airing grievances against their own government to the media.

A BJP legislator in Uttar Pradesh’s Sitapur district, 80 km from Lucknow, said last week that lawmakers like him did not really count and too many statements to the media may lead to a ‘sedition’ case against him.

“I have taken many steps, but ‘vidhayakon ki haisiyat kya hai (what stature do MLAs have?)’. If I speak too much, then sedition charges may be used against me,” MLA Rakesh Rathore said when asked about efforts to operationalise a government trauma centre in a building that had been ready for years.

Sources say the BJP team from Delhi is also tasked with assessing what went wrong in recent Panchayat elections in the state; the results that showed big losses for the BJP in its strongholds signal trouble for the party as it preps to fight for reelection in the state in less than a year.

International Yoga Day 2021: Know All About The Basic Rules Of Yoga

File FIRs Against Those Involved In Assault On Doctors: Centre To States

Previous articleDaimler to pay Nokia patent fees, ending legal fight
Next articleWorld number one Novak Djokovic kicked off his bid for a 19th Grand Slam title with a 6-2, 6-4, 6-2 win over Tennys Sandgren