Celtic Dragons secured their first Vitality Netball Superleague victory of the season with a 48-39 defeat of Surrey Storm, while Loughborough Lightning were also victorious on Friday night.

Dragons and Storm were first on court at the Copper Box Arena in London and Tania Hoffman’s outfit illustrated the full extent of their development as they got over the line against Storm.

The Welsh franchise remained composed from start to finish and were able to increasingly frustrate Storm as the contest went on.

In the second match of the night, Loughborough Lightning finished strongly to overcome Saracens Mavericks 55-47.

Celtic Dragons showed exceptional composure and heart to secure their first victory of the 2021 Vitality Netball Superleague season and end a 16-match winless run, which dated back to the 2019 season.

Dragons went into the final quarter against Storm with just a two-goal advantage and instead of going into their shells, they grew during the pivotal final moments and accelerated away from Storm.

Prior to the fixture, Dragons’ head coach Hoffman had implored her team to focus on their processes and go all out for the win. Meanwhile, Surrey Storm will have felt they had a point to prove after losing from a position of control against London Pulse in Round 12.

With motivation levels high, the first quarter was a close duel, but it was Dragons who emerged in front, aided by Amy Clinton and Rebekah Robinson both shooting at 100 per cent.

Dragons used the first few minutes of the second quarter to increase the pressure on Storm. They turned a three-goal lead into six, through excellent full-court defence and both of their shooters rewarding that work.

With Dragons pressing ahead, Mikki Austin decided it was time for a change and she brought herself into Storm’s mid-court at centre.

Austin made an instant impact, in both attack and defence. She provided composure going forward and showed everyone around her the level of pressure they needed to produce. As a result, Storm reeled Dragons back in and trailed by one at half-time.

Throughout the third quarter, it was a case of which side would blink first. Felisitus Kwangwa’s arrival tested Dragons, but they remained focused and put themselves in a match-winning position at the final pause.

With a 33-31 advantage, Dragons needed to draw upon the belief that vice-captain Clare Jones had told Sky Sports she sees in her squad.

Clinton and Robinson were not fazed by another new defensive unit against them, and, although Storm gave themselves a chance of pressing ahead, Dragons shut the door and then frustrated them.

With five minutes to go, Hoffman’s outfit converted a key passage of play into another five-goal cushion, then, under enormous pressure, held their nerve and accelerated out of reach to end their losing run. 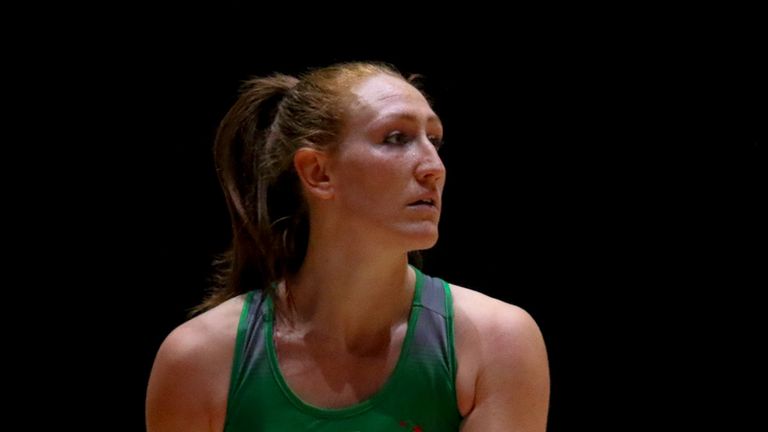 It’s not often that I’m genuinely speechless, I think everyone in our franchise and our bubble knows how much this mean to us. As far as I’m concerned, that’s the most important thing. We’ve worked, we’ve been building, and we’ve known that we can do it. Today, we proved it to ourselves.

In the second match of the night, Loughborough Lightning showed the strength housed within their squad to finish strongly and beat Saracens Mavericks.

Sara Bayman’s outfit timed their run beautifully and they will be very pleased with their 55-47 victory. For Mavericks, it marks a missed opportunity to ignite their top-four ambitions and they will return to court on Saturday against Celtic Dragons.

Due to Hannah Joseph’s injury, Bayman was forced to shift Lightning’s attack-end and she decided to move Suzie Liverseidge, who has played mainly at GA, into the WA position. The decision allowed Ella Clark and Mary Cholhok to combine together and produce a very tall shooting combination.

Meanwhile, Saracens Mavericks had reverted back to their most familiar line-up, and throughout the first quarter, Jo Trip worked exceptionally hard at GK to disrupt Cholhok.

At the other end, Mavericks’ own shooter – Ine-Mari Venter – slotted her goals easily and they richly deserved their 14-13 quarter-time lead.

Following words from Bayman, Lightning increased the pace in attack during the second quarter. Clark grew into the game, as did Liverseidge, and they edged 23-20 ahead before Mavericks responded.

A brilliant interception from Jodie Gibson sparked a storming finish to the half, and that created a level game at the break.

The third quarter, or championship quarter as it is so often called, saw Mavericks keep their line-up the same while Lightning introduced Jas Odeogberin and moved Sam May back into GK.

It was Mavericks who struck first, though, with another early turnover from Gibson. They increased their intensity as the quarter continued, and at one stage moved five in front, before Lightning’s defensive-end found their feet and they responded.

Leading 42-40 with 12 minutes to go, Lightning stuck with the seven on court and pressed early. With Chloe Essam now at GA, Mavericks took a moment or two to settle, but they did for a period of time.

Frustratingly for Mavericks, they unable to maintain their form and, as they faltered, Lightning pounced to edge away and secure their 11th victory of the season.

Previous articleArgentine football icon Diego Maradona received inadequate medical care and was left to his fate for a “prolonged, agonizing period” before he died last year, an expert medical panel concluded Friday.
Next articleRukhsana From Pari To Mamta From Sui Dhaga, Shades Of Versatility The Actor Showcased