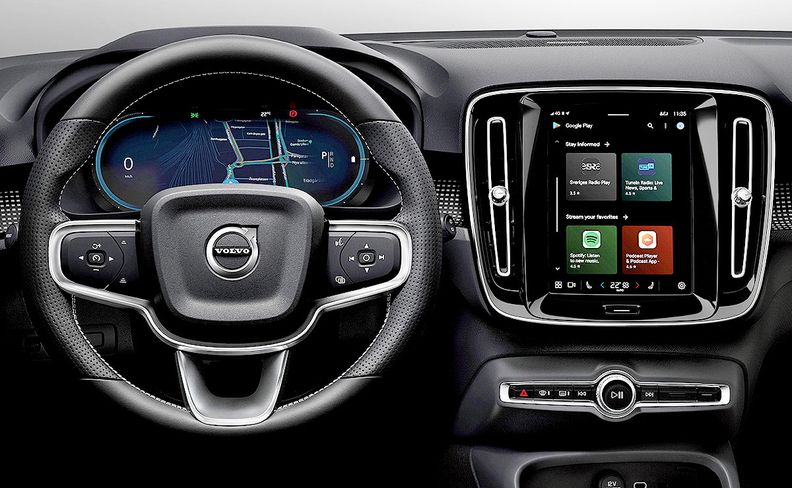 Volvo Car Group is helping chart a new path in vehicle electronics as an early adopter of Google’s Android Automotive operating system. By getting in on Android’s ground floor, Volvo also is playing a role in shaping an infotainment platform that will populate across auto brands.

Infotainment systems have become a high-tech battleground for automakers seeking differentiation and new revenue sources from subscription services. Not all manufacturers are convinced that outside suppliers are the way to do battle.

Volvo’s luxury competitors Tesla, Mercedes-Benz and BMW have plowed millions of dollars into developing powerful and bespoke systems to turn their dashboards into oversized smart devices.

The Swedish company took a more pragmatic approach, choosing to abort further development of its Sensus Connect infotainment system in favor of hooking up with Silicon Valley.

“We as a company are aiming to lead in digitalization,” Sanela Ibrovic, Volvo Cars head of connected experience, told Automotive News last week. It made sense to team up with a giant in this domain, Ibrovic said.

The timing was right. About six years ago, Google launched another version of the technology, under the slightly different name Android Auto, that relied on a smartphone to deliver media, navigation and other mobile services to a vehicle head unit. But the tech behemoth has bigger ambitions.

The new approach, Android Automotive, takes the phone out of the equation. The vehicle-based operating system also delivers deeper integration with automotive systems, such as climate control and onboard cameras.

And Android Automotive offers access to a library of third-party apps with the potential to deliver new functionality to drivers and additional revenue opportunities to automakers.

More important for carmakers is that Google’s system is future-proofed. Infotainment systems in the past were advanced at launch but failed to keep up in functionality over time.

With Android Automotive, “this is first time we could have something that continues to evolve,” Volvo Cars Product Manager Fredrik Hulth said. “We get Android updates, we get Google services updates, but our development teams are also continuing to add functionality.”

Volvo introduced Android Automotive last year on the Polestar 2 — the first high-volume model from its all-electric affiliate. Volvo then brought the system to its XC40 Recharge battery-electric compact crossover.

“As a smaller luxury brand, Volvo is wise to overachieve in the infotainment technology front as the Google Automotive OS offers real and clear advantages over traditional infotainment systems,” Kim said. “Google account and feature integration into Volvo’s infotainment brings a level of convenience, intuitiveness and ease of use not seen in any other luxury brands’ competing systems.”

Volvo’s early-adopter status offers a competitive advantage — but a short-lived one. Other automakers are embracing the platform. General Motors and Ford Motor Co. have also signed on to use Google’s system.

Being early out of the gate with Android Automotive, especially with low-volume EV models, will help establish Volvo’s new products. But it does not provide a sustainable advantage over other automakers, said Sam Abuelsamid, Guidehouse Insights’ principal analyst.

For Volvo and other automakers, the long-term benefit is not having to develop and support a proprietary operating system and custom applications. Bespoke infotainment systems might be a differentiator, but it’s not clear whether they offer a tangible advantage, he said.

“Automakers have spent enormous resources on it over the past 15 years,” Abuelsamid said.

Volvo Cars CEO Hakan Samuelsson views the tech partnership as a way to play to individual strengths. Google specializes in voice recognition and navigation systems, he said. “Why not work with them if it means we will have a better navigation system and better voice control?” he said. “You have to be humble enough to admit that some things you should not try to develop in-house.”

For that partnership to work, Volvo had to toss some old ways of doing business. Instead of entrusting the development to a supplier, Volvo worked directly with Google on the new operating system. “We managed to get the engineer-to-engineer, manager-to-manager dialogue on a more or less daily basis,” Ibrovic said.

Volvo and Google engineers worked together on the software repositories.

“If Google found something that was incorrect, they could drop us a call,” Hulth said.

Collaboration was key to adapting the Android platform to an automotive application.

Engineers had to figure out a way to modify the operating system so that it turns on without requiring an extended reboot time, Hulth said. A vehicle, unlike a smartphone, is designed to be completely turned off at the end of a drive.

“It takes 30 or 60 seconds to start up,” Hulth said. “We can’t have that every time you start the car. That is where we collaborated a lot, to get the start-up time down to levels so the customer experience is good.”

Volvo plans to make Android Automotive available in vehicles built on its Scalable Product Architecture, or SPA, which is used on models such as the XC60 crossover.

Google’s system also will be built into models produced on Volvo’s second-generation SPA2 platform, which will debut in 2022 with the launch of the third-generation XC90 crossover.