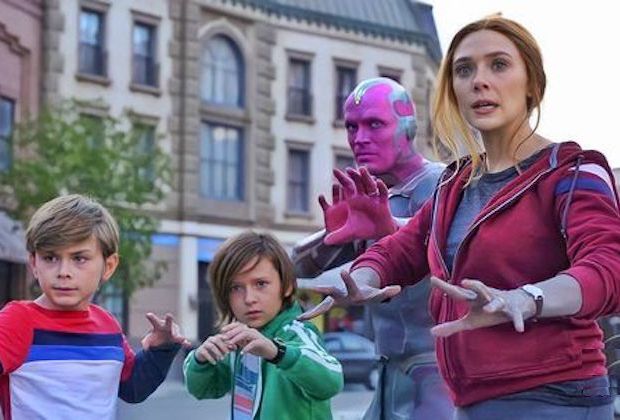 Disney+’s first Marvel series, WandaVision, wrapped its nine-episode run this Friday. Was it able to conjure a super-satisfying finish, even without a big, surprising cameo? 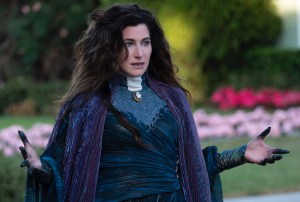 “The Series Finale” (as the episode was titled) picked up where we left off, with Wanda squaring off against Agatha Harkness on Sherwood Drive — but as Wanda quickly learned, Agatha has the ability to “take power from the undeserving. It’s kinda my thing.” So with every red blast Wanda lobs, Agatha grows stronger and Wanda becomes weaker and ashen. Agatha offers a deal: surrender, and she will let Wanda stay happy in this “pathetic corner of the world.” Wanda manages to blindside Agatha with a hurled car, but afterward only finds Agatha’s vacated boots a la the Wicked Witch of the East.

The White Vision floats in, and Wanda wonders if it is indeed her true love. But as Hayward’s creation reaches to caress her face, the touch turns into a violent head-crushing. “And I was told you were powerful,” White Vision sneers, before getting tackled by Wanda’s Vision. “Oh, this is awkward. Your ex and your boyfriend at the same party,” Agatha resurfaces to quip. “Who will you choose?” After Wanda apologizes to Vision for not telling him everything, the two agree to fight for the home they’ve created, each taking on their counterpart. 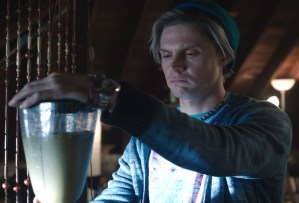 As the Skirmish in the Suburbs gets to escalating, we see that Hayward’s agents found and cuffed Jimmy. Jimmy suggests that the S.W.O.R.D. boss’ devious scheme will be found out, but Hayward gloats that when the dust settles, the Vision that emerges will be assumed to be the one Wanda “stole.” Thrown into a pen, Jimmy picks open his cuffs with a magician’s “flourish,” then uses a cellphone he pinched to call for backup. Monica, meanwhile, is holed up in the “man cave” at Agnes’ house, where she comes to realize that her captor, Pietro/”Fietro,” is actually the infamous and elusive Ralph! Using her own powers to glean that he is being remotely controlled by his choker, Monica rips it off and in doing so unlocks wimpy Ralph… Bohner.

Back at the town square, Agatha explains to Wanda that an entire chapter in the Darkhold/The Book of the Damned, is devoted to the Scarlet Witch, who belongs to no coven and has no need for incantations. “Your power exceeds even the Sorcerer Supreme” as in Doctor Strange, Agatha makes clear, further teasing a cameo that… is not meant to be. When Wanda insists she is not that person, Agatha unlocks the denizens of Westview, starting with “Dottie” aka Sarah, and they all confirm themselves to be distraught and begging for their captor’s mercy. 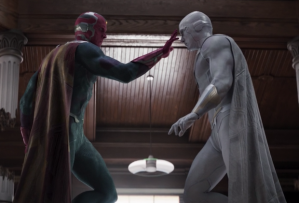 Surrounded by the pained, plaintive townsfolk, Wanda unleashes a burst of magic that begins to fracture the Hex; seeing a literal opening, Hayward declares it is time for S.W.O.R.D. to move in. As her Vision, as well as Billy and Tommy, arrive on the scene, Wanda realizes that by weakening her spell, her family is literally breaking apart. “Save Westview, or save your family,” Agatha challenges her foe. Wanda chooses the latter, and the family unites for a fight. (“Your mother and I never prepared you for this,” Vision tells the twins. “But you were born for it,” Wanda assures them.) Wanda sics the boys on the military, and speedster Tommy quickly dispatches with their rifles, while Vision chases after his alter, boggling his mind with the Ship of Theseus paradox.

With Wanda off battling Agatha, Hayward — for no good reason — aims his gun and fires at Billy and Tommy, but Monica steps into the bullets’ path to deflect them. (For good measure, Billy uses his own powers to stop the one she missed.) Hayward hops in a truck to escape, but the funnel cake cart barrels onto the scene to crash into and stop him. (“Have fun in prison!” says its driver, Darcy.) After Mind Stone-f-king White Vision enough to make him fly away, Vision returns and reunites with the twins. 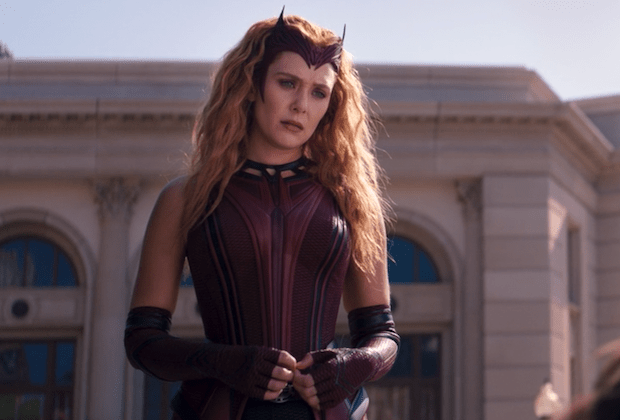 Wanda sneaks up on Agatha and uses a spell to “transport” them back to 1693 Salem, and the stake surrounded by Agatha’s dead coven. “The difference,” Wanda asserts, “is you did this on purpose,” whereas the conjuring of Westview was more an act of self-preservation. When the dead rise and start coming for Wanda, “the harbinger of chaos,” Agatha again tenders a deal: “Give me your power and I will correct the flaws in your original spell,” and the Vision family can live in peace. Wanda tackles Agatha, sending them back into the sky above Westview, where Wanda fends off Vision’s help and really slugs it out with her fellow sorceress, lobbing red ball after red ball. Agatha appears to absorb all of Wanda’s power, leaving Wanda a wrinkled shell of herself. But when Agatha goes to deploy her newfound power… she comes up empty. The color comes back to a smirking Wanda’s skin as she reveals the runes that she discreetly etched into the Hex during their skirmish. “Thanks for the lesson,” Wanda says, before absorbing back her power and more, transforming into the Scarlet Witch with an insanely hot costume and all.

Returning to the ground, Wanda turns a defeated Agatha back into the “nosy neighbor” character she created. Wanda reunites with her family, though Vision recognizes that she is about to set things right for the rest of Westview, “just not for us.” And after tucking the twins in for the night back home, Wanda and Vision have some heartfelt words, before the contracting Hex reaches their home.

“Before I go, I feel I must know what am I,” Vision asks his wife. “You, Vision, are the piece of the Mind Stone that lives in me,” Wanda explains. “A body of blood and bone I created,” built of “my sadness and my hope. But mostly, you’re my love.” Noting that he is in a way “a memory made real,” Vision says, “Who know what I might be next?” In the final seconds before the Hex disappears, Vision points out, “We have said goodbye before, so it stands to reason—”

The Hex transforms their house back into the empty lot it was, after which Wanda walks into town, met by the scowls of those she held hostage. Monica tells Wanda these people will never know what she sacrificed for them, but Wanda maintains that would never change how they see her. She assures Monica she will come to understand the incredible power she possesses, before suiting back up and flying off.

In Bonus Scene No. 1, as Jimmy takes charge of the scene in Westview (Darcy blew off the debrief), a female agent leads Captain Rambeau into the nearby theater for some sort of meeting. The agent reveals herself to be a Skrull, and says she was sent by “a  friend of your mother’s. He heard you’d been grounded, and would like to meet you.” “Where?,” Monica asks — and the Skrull points up, meaning outer space, as in where was last saw Nick Fury in Spider-Man: Far From Home.

In Bonus Scene No. 2, we see that Wanda has retreated to a small cabin in a remote, mountainous area. But as the camera follows Wanda in from the front porch to tend to a whistling tea kettle, we realize that her Scarlet Witch self is in the bedroom, intently studying the Darkhold as  the voices of her lost children echo inside her head….

What did you think of WandaVision‘s finale, and its full nine-episode run?

Previous article‘Ranju ki Betiyaan’: Will Bulbul be able to save money for her competition?
Next articleUK’s Prince Philip Moved Back To Private Hospital To Recover: Palace