Parineeti Choprais currently basking in the good reviews that she has got for her powerful and versatile performances in three back to back films— ‘Sandeep Aur Pinky Faraar’, ‘The Girl On The Train’, and ‘Saina’.

She is among the stars who never fails to leave her fans inspired. With her stellar on screen performances, Parineeti has clearly made a place for herself in people’s hearts.One of the most sought actresses in Bollywood right now, Parineeti is also an avid social media user and happily shares pictures of herself and things she is most passionate about. She has a strong social media presence and she loves to keeps her fans updated with her personal and professional life.

The ‘Ishaqzaade’ actress who is currently enjoying her time in Turkey, on Thursday took to the Instagram story and shared a beautiful video of herself chilling by the beachside.

Parineeti is donning a blue and black athleisure and it seems the video was taken post a workout session. The actress is flaunting her natural glow and flashing a million dollar smile for the lens. She captioned the clip as, “Thankyou!#2021”.

Take a look at the screenshot here- 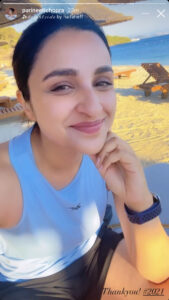 On the work front, she will next star opposite Ranbir Kapoor in Sandeep Vanga’s crime drama film titled ‘Animal’.