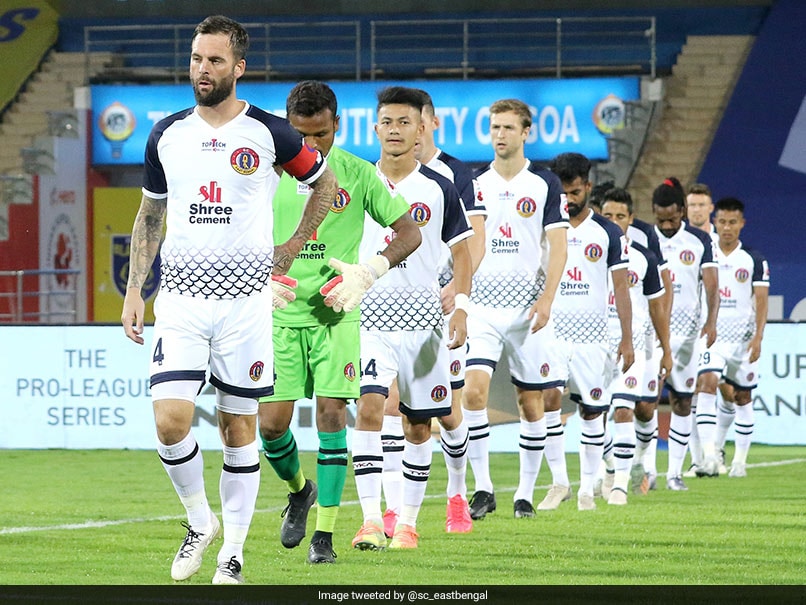 East Bengal will now continue to play in the Indian Super League.© Twitter

West Bengal chief minister Mamata Banerjee on Wednesday brokered peace between the warring East Bengal and their investors Shree Cement Limited and announced that the red-and-gold outfit would play in the upcoming Indian Super League, ending months of uncertainty. “Khela hobe (the game is on). I’m very happy today,” Banerjee announced at the state secretariat Nabanna. “All is well that ends well. They had some uncertainties till now whether they would be able to play in ISL but now East Bengal’s problem is solved. Shree Cement has accepted my request (to extend the deal) with East Bengal and have accepted all my proposals.”

Banerjee later urged the representatives of both East Bengal and Shree Cement to shake hands as she once again played a key role, about a year after she had roped in the Rajasthan-based investors to acquire a 76 per cent stake that had paved the way for the century-old club’s last minute entry to ISL last season.

“Go and shake hands and I will remain in between,” Banerjee told the representatives of Shree Cement and East Bengal.

The meeeting was called by the chief minister after SCL shot off a letter to Banerjee on Monday, expressing their decision to end the five-year deal after EB management were adamant in not signing the final agreement. The deadlock lasted for about eight months and there were statewide fan protests.

“East Bengal played the ISL last year owing to Shree Cement. This time things were a bit uncertain because of which I too became a bit hostile (on Monday).

“Where will the crores of East Bengal fans go, I thought, if they aren’t able to play? East Bengal have a brand value in world football. I had requested them (SCL) and they agreed,” she said.

She added: “I think EB fans are happy today. Even MB (Mohun Bagan) will be happy because they want their opponents to play. I had received many calls, voicing their concern about East Bengal’s fate in ISL. So, everyone would be happy today.”

“They are bringing up a lot of cement industries in West Bengal. We can discuss other things later on, at the moment time is very short, the priority is football now.” she said.

A spokesperson of SCL thanked Banerjee and said: “We also want the games to happen. Due to certain reasons, we couldn”t sign the final term sheet. We were trying since the past year to make things work. However, since you have requested we will be participating in this year’s ISL.”

“Didi has always been with us. For her, we could install floodlights at the club grounds. Just like last year, this year too Didi has rescued us. I just cannot thank her enough. ‘Khela hobe’ slogan couldn”t have been more apt today.”

It remains to be seen if Liverpool legend Robbie Fowler remains at the helm of coaching at SCEB who will once again race against time with the international transfer window closing at the end of the month.

The Fowler-coached side had finished a poor ninth out of 11 teams in the last season of the ISL.

Previous articleCommissioned by the Minister. A special team of “Al Riyada” is following the case of “Khaled Massad”
Next articleFrance: The situation at Kabul airport is very complicated . and we receive thousands of evacuation requests