When Karan Johar Made Salman Khan Awkward On Aishwarya Rai Joke; Not Just Us But Even Ranveer Singh Got Stunned!

Karan Johar and his sense of humour is simply amazing. He is capable of uttering the most controversial lines in the most subtle manner ever without even offending anyone. Also, his puns are way too exciting to handle for our fans and even for celebrities. Maybe this is the reason that many actors fear facing the ace director for a rapid-fire round on his chat show Koffee With Karan. But there was a time when Salman Khan challenged KJo for an instant rapid fire on the stage of an award function but was left awkward after the director cracked a joke about Aishwarya Rai Bachchan.

Yes! Only Karan has the guts to crack an Aishwarya joke in front of Salman and making the audience laugh. Well, not only this, Kjo even made the actor uncomfortable with his intimate jokes, and we know you would love to hear about it. Keep scrolling further.

Salman Khan had conducted a segment similar to that of Koffee With Karan, with Karan Johar and turned a host of the show while KJo was on the guest chair. The Dabangg actor named the segment as ‘Sharbat With Salman’. Initially, the Radhe actor was pulling the legs of the director until the filmmaker turned the table and trolled the actor instead.

During this segment, Salman Khan had asked Karan Johar if he got a chance to turn himself into a woman, which actress he would like to turn into? Without wasting time, Karan quipped Aishwarya Rai. This response left the crowd laughing, but the actor was left speechless, but he added Aishwarya Rai Bachchan in response, making everyone laugh a bit harder.

When Salman asked him the reason behind this? Karan got an opportunity to tease him in public and asked him that you are asking me this question. Khan started smiling to hide the apparent embarrassment, and then he moved to the next question. Well, this definitely got everyone sitting in the audience shocked. But, the expression of one actor that we all can relate to the most was that of Ranveer Singh who sat next to his then rumoured girlfriend and now wife Deepika Padukone. The Gunday actor was startled and widened his eyes at this moment and we are guessing most of us would have had the same reaction had we been in the audience seat there.

As we already said, only Karan Johar could have attempted to crack such a personal joke in front of Salman Khan. Check out this fun session below: 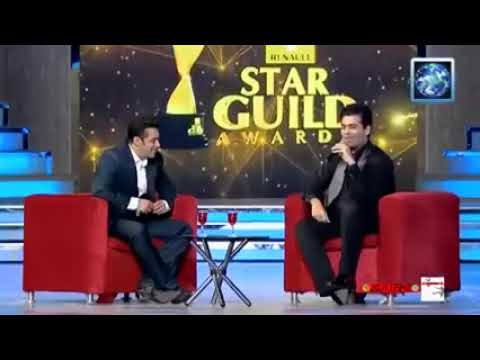 . Did You Know? Saif Ali Khan Was Almost Killed By His Fan’s Boyfriend As He Wanted To Spoil The Actor’s ‘Million-Dollar Face’

Previous articleRashmika Mandanna Is Oozing The Oomph In A Satin Slip Sultry Dress & We Can’t Take Our Eyes Off Her
Next articleNetflix: Italian Netflix Film “A Classic Horror Story” Promises to Be Anything But