When Ranbir Kapoor Dug His Nose, Wiped With Anushka Sharma’s ‘Bhaade Ke’ Clothes & Got Scolded For It

By John Mahon
May 4, 2021
7
EntertainmentBollywood

If there’s one on-screen ‘Jodi’ that we would love to see again in the future is Ranbir Kapoor and Anushka Sharma’s. The two have worked together in different films including Sanju and Bombay Velvet. Today, we bring you a throwback of the time when Ranbir dug his nose and wiped it off Anushka’s dress while doing an interview for their film ‘Ae Dil Hai Mushkil’.

Ranbir and Anushka share a friendly connection off-screen too and are close friends.

Back in 2016, during an interview with The Quint while promoting ‘Ae Dil Hai Mushkil’, Anushka Sharma says, “He digs his nose all the time like he’s doing right now.” And that’s when Ranbir Kapoor wipes it off on her dress and the actress says, “Can you stop it? These are ‘bhaade ke kapde (rented clothes)’”.

However, Anushka immediately clarifies that the shrug she was wearing, “Not this, this is my own.” Ranbir then calls it a ‘doctor’s coat’ and makes fun of the same.

Take a look at the video here: 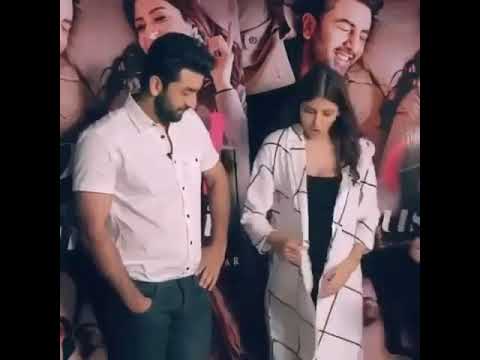 We would love to see Ranbir Kapoor and Anushka Sharma working together soon.

Meanwhile, in a BTS video from Ae Dil Hai Mushkil, we see Ranbir Kapoor getting upset because Anushka Sharma slapped him multiple times during a scene. ‘Rockstar’ actor then got annoyed because she hit him really hard. Upon seeing Ranbir upset, Anushka approached him and apologized but it was too late to do anything by then.

“There is a limit to it,” Kapoor said. “I told you not to do it, it’s not a joke.” Replying to him, Sharma said, “Did I do it on purpose? Are you really upset?” Ranbir was wiping his face with a tissue and said, “Yeah, of course, you’re hitting hard.”

Haha, these two are really cute on and off-screen.

Did You Know Doordarshan Banned An Ad Featuring The Actress & Marc Robinson In The ’90s? Here’s Why

Grabs Around 800 Screens; Salman Khan Rules The Gulf Market & The Current Data VS Dabangg 3 Proves So!