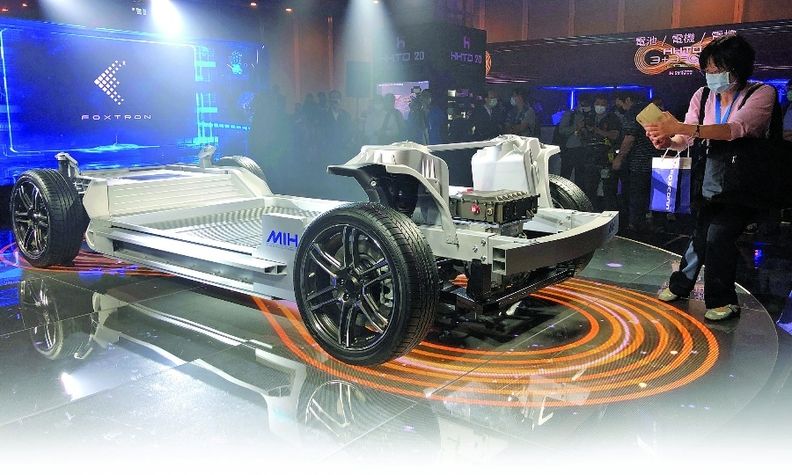 The idea of the self-contained EV skateboard chassis has become so alluring that startups, suppliers and even automakers are marketing them as plug-and-play solutions on which customers can simply add a body, also called a top hat.

But like many catchy ideas on the path to electromobility, this one also is stumbling as it meets the hard reality of going from vision to vehicle development and manufacturing.

The growth of the skateboard concept in the past two to three years is partly a result of its disruptive potential. Proponents talk about the freedoms that come from replacing the internal combustion engine with a solution that neatly positions the batteries and electric drivetrain components into a comparatively thin rolling chassis.

With no engine in the way, theoretically any top hat or body can be attached.

The benefits to automakers seem obvious.

“They don’t have to start from scratch, which means they can reduce costs and time to market,” Marco Kollmeier, Benteler’s head of e-mobility, said last year about the supplier’s Electric Drive System 2.0 skateboard rolling chassis, developed with Robert Bosch.

Canoo’s EV skateboard was “a self-contained unit that can be paired with any cabin design,” Hyundai said early last year when it announced that it would partner with the startup to co-develop underpinnings for small passenger vehicles based on Canoo’s design.

Canoo has described its dedicated skateboard as being superior to so-called “electromodding,” in which electric drivetrains are fitted to platforms designed for internal combustion engines.

Around the same time, Ford said it would develop an electric Lincoln based on the skateboard running chassis created by startup Rivian, a company in which Ford had a stake.

The largest player in the EV platform business in terms of company size is Volkswagen Group, which has actively sought customers for its MEB electric architecture. Ford signed up and is developing one and possibly two EVs based on MEB starting in 2023.

The idea of the transferrable chassis goes back 100 years or more to the days of coachbuilders that would take a running chassis from manufacturers such as Bentley and offer different bodies on top.

The concept has never really gone away in the world of trucks, but it was revived for passenger cars in 2002 by General Motors, which built the Hy-Wire fuel cell concept following the same principle.

The 11-inch-thick skateboard rolling chassis contained the drivetrain, while the body was attached at 10 mounting points. In the future, GM posited, owners could drive to their nearest dealership and swap bodies.

The idea was revived again in 2018 by Swiss automotive visionary Rinspeed for the Snap, an electric chassis concept that could take multiple commercially oriented bodies.

The customers are certainly out there.

In February, Jaguar Land Rover said it was looking outside the company for an electric platform that could underpin EVs for the reborn Jaguar brand.

Fisker has signed up to use underpinnings from Magna for its Ocean electric SUV, and then announced it was exploring a partnership with Foxconn to use its skateboard for a second vehicle.

It’s tempting to believe it can work, said David Twohig, a freelance engineer who has worked as chief engineer at Alpine and chief technical officer for Chinese-German automaker Byton.

For one thing, manufacturers need to increase their economies of scale. “It’s simply mathematical. The money you need to spend to develop a new platform is mind-blowing,” Twohig told Automotive News Europe.

Working with a partner or getting the platform or running chassis from a third party also is unlikely to dilute the brand. “It’s sad to say but one electric motor is much the same as another,” he said.

But the idea that customers can simply plug their own body on top of someone else’s skateboard running chassis is simplistic in the extreme, Twohig believes. It would compromise a range of key developmental areas such as crash protection, heating and ventilation, noise, vibration and harshness, and handling.

“If you’re carrying human beings in a vehicle, those whole-vehicle attributes are still of primary importance,” he said. “[Is the argument that] the only thing that is important is the skateboard? I don’t buy it.”

Perhaps the biggest hurdle would be integrating modern-day electronics and electrical architectures. “It’s massively complex and expensive, and most platform-sharing projects usually run into difficulty on the EE architecture, more than on the mechanical side,” Twohig said.

For a vehicle, it’s difficult to improve on the metal monocoque design in terms of cost, crash protection, weight and driving dynamics. “A scalable unibody is the best way to get the most out of the material,” Cazes said.

Connecting the body to the chassis is another problem for skateboard designs, he added.

The rise of the skateboard pitch is connected to the need of startups to raise money, Cazes believes. “It’s an easy way for them to convince the financial markets they have a solution,” he said.

All the challenges linked to skateboard running chassis appear to have sparked a reality check. Ford canceled the Lincoln EV on the Rivian skateboard and has yet to commit to putting a vehicle from its namesake brand on these underpinnings. Ford announced last month that a new, dedicated EV architecture would underpin battery-electric versions of the Explorer and Lincoln Aviator crossovers, as well as midsize pickups and “rugged SUVs” that will go into production within the decade.

Meanwhile, Canoo CEO Tony Aquila indicated that the Hyundai deal is also over during an investor call in March, saying that the company was “de-emphasizing” its contract work. “We are not trying to be an assembler of parts. We are creating IP [intellectual property],” he said.

Williams made the switch after learning from potential customers that they felt there would still be a lot to do after buying the EVX skateboard.

“Anybody working with us would have had to do a lot of engineering to get to a product,” Paul McNamara, technical director for Williams Advanced Engineering, told journalists in April. “So, here we have done almost all the heavy lifting earlier on between ourselves and Italdesign.”

Meanwhile, Foxconn’s MIH electric platform, announced last October, combines hardware with software to make the integration of the EE architecture easier. The maker of Apple’s iPhone wants its solution to be as ubiquitous to the EV industry as Google’s Android operating system is to the smartphone and tablet sectors, Foxconn said in a statement.

“By allowing developers access to key technologies and tools for developing EVs on MIH, Foxconn reduces the entry barriers to the industry,” the company said.

Israeli startup REE is pitching itself as a provider of technology that genuinely can create a flexible electric platform.

The company’s so-called “corner module” packs a wheel, motor and suspension into a small enough area to liberate far more space for a van or ride-hailing car than a skateboard platform.

“A monocoque is probably the least modular thing you can think of, so the industry is now trying to have a skateboard that will just be slightly modular and then put different top hats on that.” he said. “But you cannot change anything. The top hat is very limited because the chassis is the limiting factor.”

In April, REE announced a partnership with Toyota-owned truck maker Hino to develop modular electric vehicles both for commercial and ride-hailing purposes, with prototypes planned for 2022.

Commercial vehicles are one area in which the skateboard approach makes sense, engineer Twohig said.

“I don’t believe in it for passenger cars, but I do believe in it for the LCV [light-commercial-vehicle] world where you are less dependent on the quality of the upper body and when you can simplify the EE architecture,” he said. “I do believe it’s possible to relatively simply plug a 1-ton delivery van or pickup or a food truck into a rolling chassis.”

EV startups that use a skateboard design for vans look to be thriving.

Rivian is developing an EV van for Amazon and U.K. startup Arrival is building a van for UPS. Both products are set to launch next year.

Benteler in April announced an electric chassis designed for minibuses, although it says its Electric Drive System skateboard is still being used to develop electric passenger cars by Chinese automaker Evergrande, a spokesman said.

As with mobility as a service, autonomous driving, final-mile delivery or any of the other disruptions to automotive that are taking far longer to materialize than initially promised, the plug-and-play EV skateboard chassis idea is another that’s facing its own reality check. But behind the breathless investor pitches, there remains an idea that still has merit as the old order changes.

Previous articleMLB 21 update 1.09 is out – Notes on patch June 18 June
Next articlePhiladelphia 76ers come from behind to force Game 7 against Atlanta Hawks | NBA