Will iCarly ‘Go There’ With Carly and Freddie? The Revival Cast Weighs In 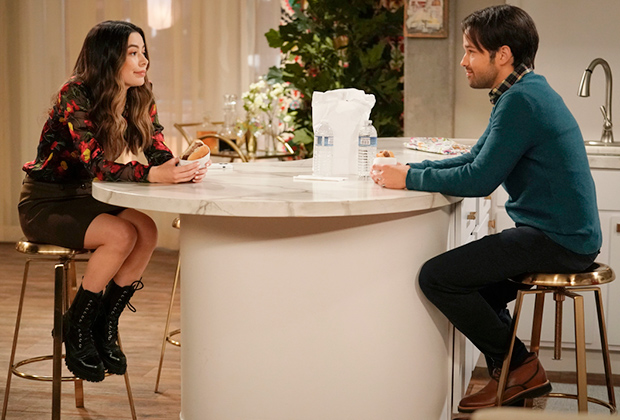 You’d be hard-pressed to find an iCarly fan who didn’t (at least once!) consider the chemistry between the show’s titular vlogger and her mama’s boy of a producer. Now that the Nickelodeon series is returning in a more adult form on Paramount+, is an attempt at romance in the cards for Carly Shay and Freddie Benson?

“Neither of our characters’ love lives are going very well on the show,” Miranda Cosgrove admits to TVLine, explaining that Freddie has already been divorced twice. “Carly doesn’t have kids and has never been married, but every time she tries go on a date, it ends poorly. She and Freddie are definitely both single and friends, so you never know!”

Nathan Kress is similarly on the fence, though he admits, “It’s a question that I’ve wondered myself. There’s a lot of life that would need to happen for a lot of characters on this show before [Freddie and Carly dating] becomes a viable conclusion, but I truly don’t know. If it makes sense, maybe!”

On the topic of Freddie’s failed marriages, Kress insists that they weren’t “100 percent” his character’s fault. “Freddie probably had a lot of maturity issues that he needed to go through,” Kress says. “What we’ve also learned is that Freddie falls fast. He has become the most hopeless romantic, and he gets caught up in story a lot. He’s also trying to be a good guy. I mean, who else is going to adopt his stepdaughter and retain custody even after the divorce? Few people other than Freddie would find themselves in these situations.”

So, how do the show’s new additions feel about a potential Carly-Freddie romance? Laci Mosley, who plays Carly’s roommate Harper, says, “It’s definitely something I was rooting for as a child watching the show. It’s funny to want other kids to kiss. But as adults, it’s fun to watch them navigate this will they/won’t they thing.”

And Jaidyn Triplett, who plays Freddie’s stepdaughter Millicent, says, “There’s definitely a chance between them. Both of their love lives are going down in flames!”

To be fair, the original iCarly did explore a relationship between Freddie and Sam. But now that Jennette McCurdy has made it clear — like, crystal clear — that Sam isn’t returning to iCarly, we couldn’t help but wonder.

The iCarly revival premieres Thursday, June 17 on Paramount+. Are you hoping for these two characters to get together after all these years? Vote in our poll below, then drop a comment with your thoughts on the revival.