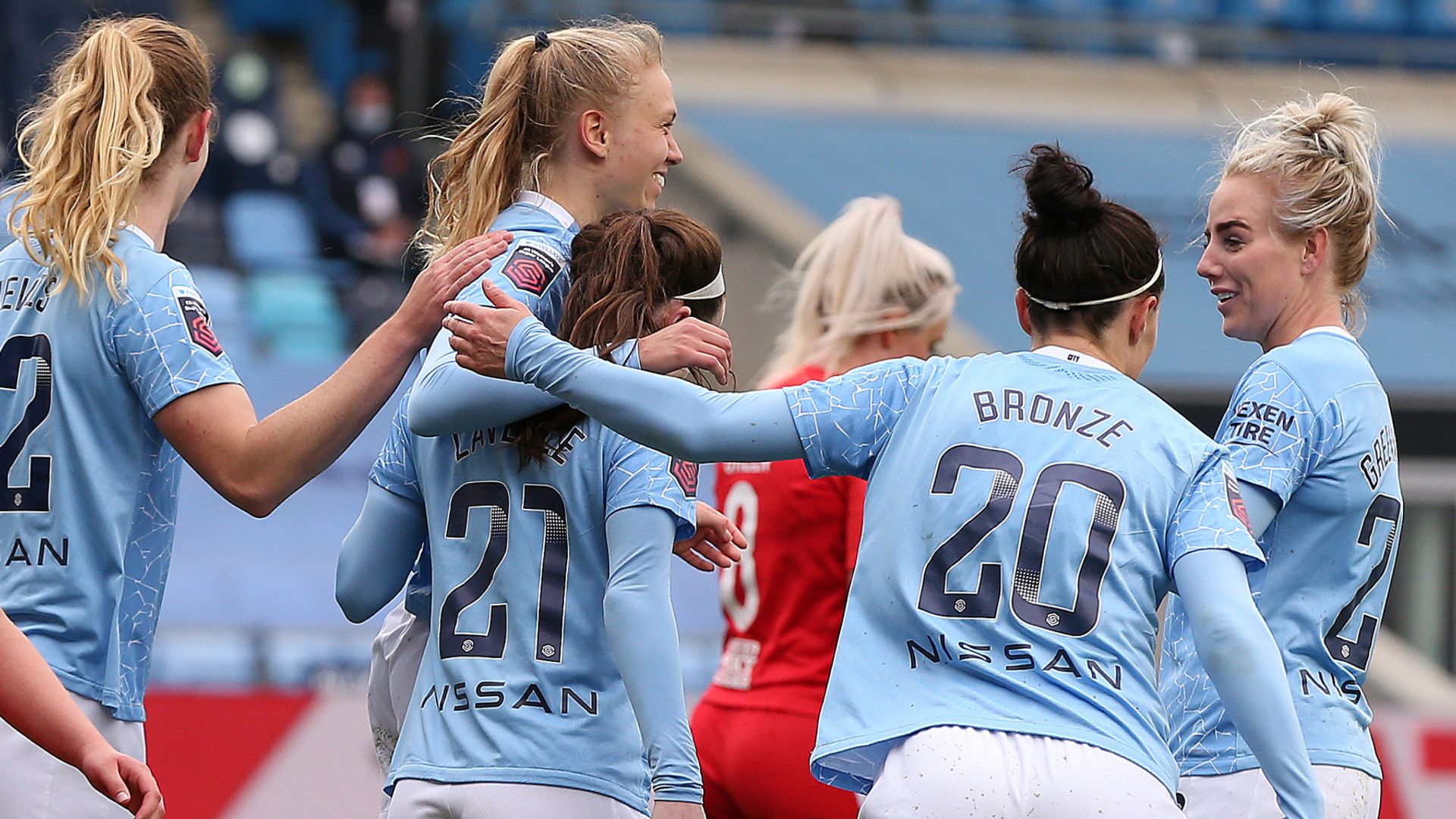 Manchester City crushed Birmingham 4-0 to take the Women’s Super League title race to the final day of the season, but their victory was overshadowed by a serious-looking injury to two-goal striker Chloe Kelly in the second half.

With Chelsea playing in the Champions League, City were looking for a victory which would take them a point clear at the top of the table and turn up the heat on Emma Hayes’s side, who have a game in hand.

They dominated from the start and were 1-0 up after 10 minutes when Lauren Hemp did well to get to the byline and find Caroline Weir with her cut-back.

Weir’s low shot was well saved by Hannah Hampton but she could only palm the ball straight into the path of Kelly for a simple tap-in.

Hemp and Kelly were causing their opponents all sorts of problems and they combined again for the second goal after 23 minutes.

Hemp drove to the byline once more and squared for Kelly to tap past Hampton again.

That goal seemed to rally Carla Ward’s side, who settled down and defended much more doggedly, although they could not establish any meaningful possession, with Claudia Walker looking isolated up front.

Birmingham stayed resolute after the break and restricted City to speculative shots from distance.

Kelly looked to get her hat-trick, but her driving run after 65 minutes saw her collide heavily with Rebecca Holloway, winning her side a penalty but leaving the pitch on a stretcher in a knee brace in clear discomfort.

After a long break in play, Weir stepped up to take the spot-kick after 72 minutes, but Hampton got down well to her right to palm it away.

Weir had the opportunity to make amends after 77 minutes, but her curling shot from inside the area was foiled once again by Hampton.

Substitute Janine Beckie forced another good save as City probed for a third but struggled to find a way past the impressive Hampton.

The pressure finally told after 85 minutes when Beckie’s corner was scrambled in by Esme Morgan.

The visitors succumbed again to a Beckie corner four minutes into added time when substitute Sam Mewis tapped in as City increased the pressure on Chelsea, who take on Tottenham in midweek.

It was a seventh straight win for the north London club and meant they ended the day three points clear of fourth-placed Manchester United with one round of Women’s Super League matches left, and with a vastly superior goal difference.

Katie McCabe opened the scoring – her fourth goal of the WSL season – in the 22nd minute with a fine chip over Sandy MacIver.

Everton equalised 15 minutes from full-time when Megan Finnigan directed her header from a central position into the bottom corner.

It looked like the spoils were set to be shared but, in the 94th minute, McCabe was brought down and the visitors were awarded a spot-kick.

Captain Little stepped up and calmly sent the ball into the top-right corner to claim all three points and a top-three spot for the Gunners.

But Bristol City went closest to a first-half breakthrough, Kiera Skeels smashing the ball against the crossbar in the seventh minute.

United eventually took the lead in the 79th minute. Jane Ross fired a shot against the post from close range and, in the resulting scramble, Daniels deflected the ball into her own net.

The defeat left Bristol City without a win in their last six WSL matches.

Fara Williams netted from the penalty spot on her final home game as Reading beat Brighton 3-2 in the Women’s Super League.

Both sides lined up for a guard of honour ahead of Williams’ entry at the Madejski after England’s most capped player announced she will retire at the end of the season.

Lee Geum-min then netted a two-minute brace to level proceedings. A well-guided header was followed by a sensational strike immediately from the restart.

But Natasha Harding snatched the winner after 55 minutes as Reading leapfrogged Brighton in the WSL table.

Goalless between Villa and West Ham

WSL relegation battlers Aston Villa and West Ham both missed a host of chances as they played out their second goalless draw in a matter of weeks.

Dagny Brynjarsdottir missed a golden chance to give West Ham the lead before the break in an uneventful first half.

Shania Hayles then fluffed her lines as Villa looked set to open the score soon after the restart.

The Hammers finished the stronger with both Martha Thomas and Emily van Egmond crashing efforts off the crossbar in the closing stages but a point each did little to relieve the pressure on either side.