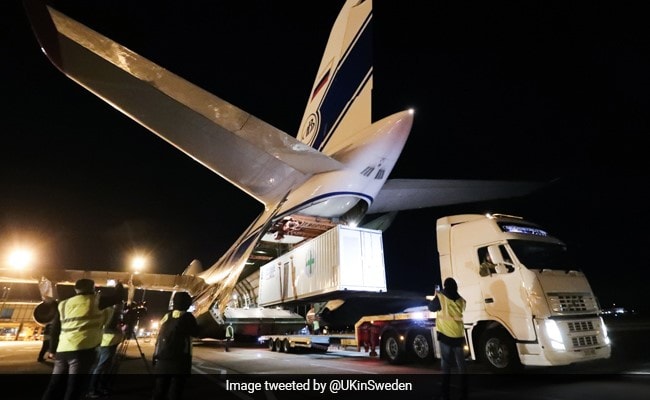 The Foreign, Commonwealth & Development Office (FCDO), which has funded to supplies, said airport staff worked through the night to load the life-saving kit aboard the massive Antonov 124 aircraft, which is expected to land in Delhi at 0800 IST on Sunday morning after which the Indian Red Cross will help transfer them to hospitals.

Each of the three oxygen generation units – the size of 40 foot freight containers – produces 500 litres of oxygen per minute, enough for 50 people to use at a time.

“The UK is sending surplus oxygen generators from Northern Ireland to India. This life-saving equipment will support the country’s hospitals as they care for vulnerable COVID patients,” said UK Foreign Secretary Dominic Raab.

“The UK and India are working together to tackle this pandemic. No-one is safe until we are all safe,” he said.

The latest set of supplies were announced earlier and follow 200 ventilators and 495 oxygen concentrators sent from the UK to India last month, also funded by the FCDO. The assistance package has been sourced by the Department of Health and Social Care (DHSC) and the offer by Northern Ireland’s health service is in addition to 1,000 ventilators offered by the DHSC.

“The situation in India is heart-breaking and we stand side by side with our friends as they face this immense challenge,” said UK Health Secretary Matt Hancock.

“As we battle this global pandemic together, the vital equipment we are providing, including ventilators and oxygen generators, will help save lives and support India’s healthcare system. As one United Kingdom we will continue to do all we can to help the Indian health authorities turn the tide on this dreadful virus,” he said.

“The scenes coming out of India are a vivid reminder of the devastation this virus can cause and it shows no sign of abating,” said Swann.

“It is our moral duty to help and support where we can. Oxygen supply is under severe stress in India’s health system and the three oxygen generation units that we are sending today are each capable of producing 500 litres of oxygen per minute. I sincerely hope this equipment goes some way to easing the pressure and pain the country is currently experiencing,” he said.

India is undergoing a devastating second wave of the coronavirus pandemic, resulting in a shortage of vital medical equipment and supplies. The UK is among several countries that have stepped in with offers of support from their surplus stocks during the crisis.

Save A Life. Help Fight The Coronavirus Outbreak In India