Karan Patel rose to fame with his stint in Ekta Kapoor show Yeh Hai Mohabbatein. The actor played the role of Raman Bhalla and was received a lot of love for his portrayal. But just like his on-screen character, the actor is honest and straight forward in his real-life too. In the latest turn of events, he has called out the Maharashtra government for their partial lockdown rules.

As most know, COVID-19 is witnessing its second wave in India. Cases have been rising at a high pace and the government is doing its best to get things in control. As many as 1 lakh cases have been registered in a single day in the past days. Maharashtra has been witnessing the majority number of cases, owing to which a partial lockdown has been imposed.

Karan Patel has reacted to the latest guideline and called it ‘stupid.’ The Yeh Hai Mohabbatein actor has pointed out how actors, cricketers can continue with their work, but it is the normal man who will now have to suffer. In addition, he has also taken a dig at politicians conducting rally for elections.

Taking to his Instagram story, Karan Patel wrote, “Actors CAN continue to shoot for their projects. Cricketers CAN continue to play their matches, day or night. Politicians CAN hold rallies with thousands of people. States CAN conduct elections and expect you to come out to vote. BUT the common man cannot go to work. #Stupid and Outright senseless.” 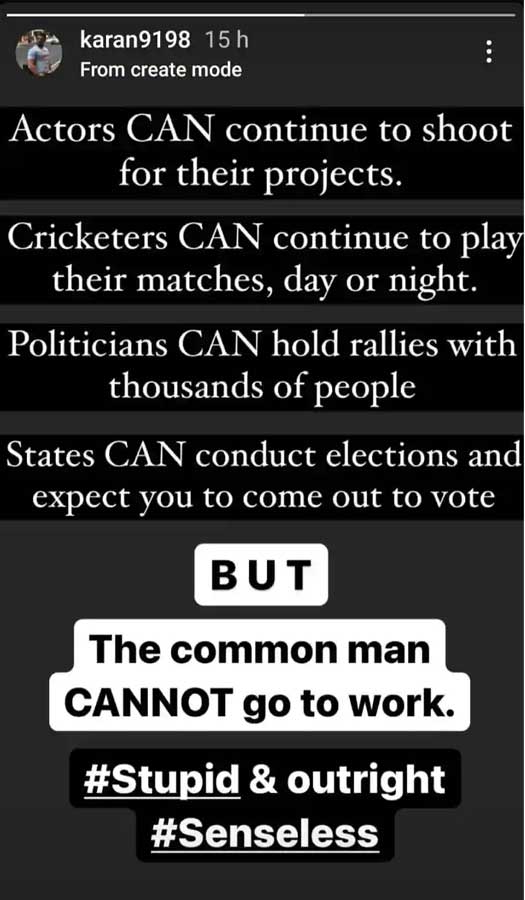 Well, Karan isn’t the only one who opposes the latest restrictions. Television star Nakuul Mehta has a similar opinion that he expressed on social media. He wrote, “Political rallies – Not needed, Bollywood Awards Shows – Nah, Religious Gathering – No, Kumbh Mela – Deffo not BUT ALONE IN CAR – YAAAS!!!!!”

What is your take on the statements made by Karan Patel & Nakuul Mehta? Share with us in the comment section below.

Grey’s Anatomy Recap: Decision Time for Meredith — Life With Her Family and Friends… or Afterlife With Derek

Previous articleKareena Kapoor Khan Was Paid Rs 11,000 As Her First Salary For Hum Dil De Chuke Sanam But It Never Happened!
Next articleJoshuah Bledsoe exclusive: Life as a Draft ‘sleeper’, versatility and being